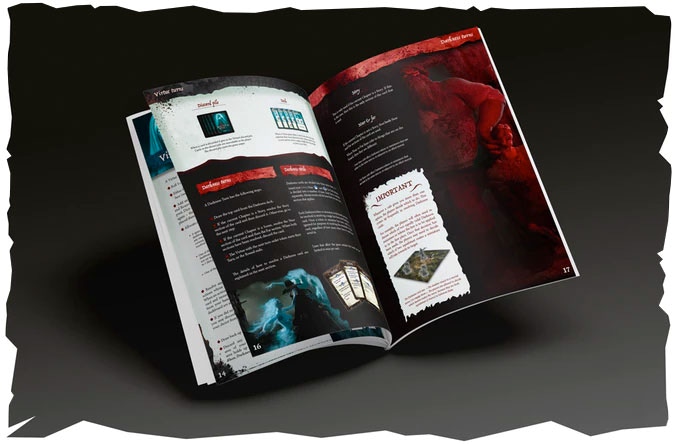 It is the end of the 16th century. This is a turbulent time, with bandits lurking in the wilds of the countryside, and pirates roaming the high seas. Evil taints the hearts of men, and many give in to temptation. Many, but not all. Against this tide of corruption stands Solomon Kane. This mortal hero fights his lone crusade, aided by the silent might of the immortal Virtues. Together they fight against the implacable Darkness. This is the fearless opponent who tries to thwart our hero at every turn, and who must be overcome by the players if Solomon Kane is to emerge victorious.

Darkness has emissaries too, and these Shadows are also attracted by Solomon Kane’s faith. Shadows are not physical beings – they are the essence of the nameless horror that hides just out of sight, the lurking danger you think you glimpse from the corner of your eye, or the secret dread that sends shivers down your spine. This can drive lesser men to madness, and even Solomon Kane could be overwhelmed, for whilst his faith is strong, Darkness is powerful too. Solomon Kane can see neither Virtue nor Shadow, yet he can feel both, and he has his faith. This tells him that Good must triumph over Evil. It is up to the Virtues to ensure that he is right.

« Solomon Kane… considered himself the fulfiller of God’s judgment, a vessel of wrath to be emptied upon the souls of the unrighteous.  »

The central figure in the game is Solomon Kane himself. He is a dour English Puritan and redresser of wrongs who roams the world, fighting against the ungodly and evil works of men and foul magic alike. He follows no master save his conscience, though that alone drives him to the ends of the Earth to fulfil his quest. All his life he has travelled, aiding the weak and fighting oppression. From the bleak moors of England, through the damp forests of Germany, to the sweltering jungles and savannahs of Africa – even to the shores of the distant New World of America.

He neither knows nor questions why he is driven to do this. It simply must be done. To Solomon Kane, he is doing God’s work. To his enemies he is a relentless fury, armed with flintlock and rapier, and armoured in unshakeable faith. The knowledge of the rightness of his cause makes him unstoppable, and gives him the ability to overcome any fiend or demon. At least, it does when the Virtues are on his side.

“How I overcame it, I know not, for the battle was hard and long, but the powers of good and light were on my side, which are mightier than the powers of Hell.”

The forces of light

Each player takes the part of one of the four Cardinal Virtues: Courage, Prudence, Temperance, and Justice, each with a special combination of abilities that reflect their unique role. Together they must help Solomon Kane achieve his mission. 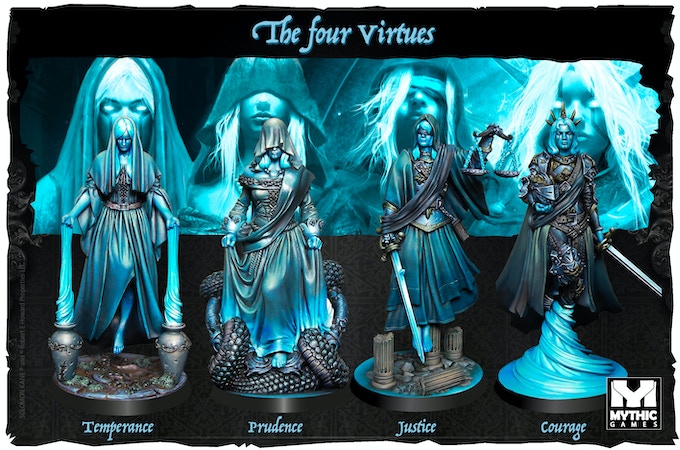 Courage is bold and sometimes reckless. She cannot sit idly by, and encourages Solomon to resolve everything with action! Her specialities are Moving and Fighting. 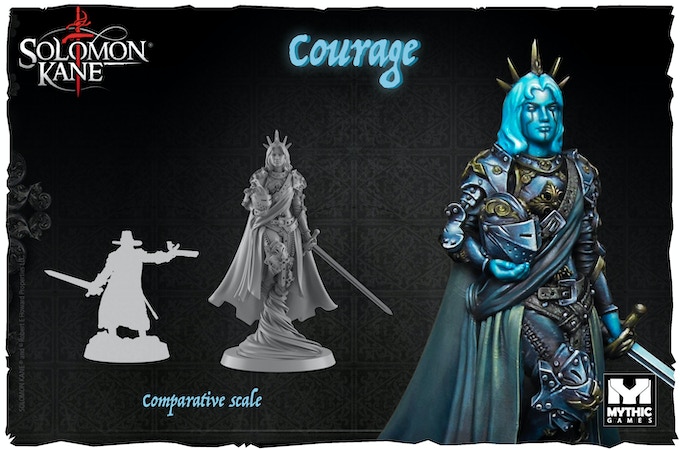 Prudence tries to keep an eye on everything. She helps the other Virtues as well as Solomon, providing vital support to both. 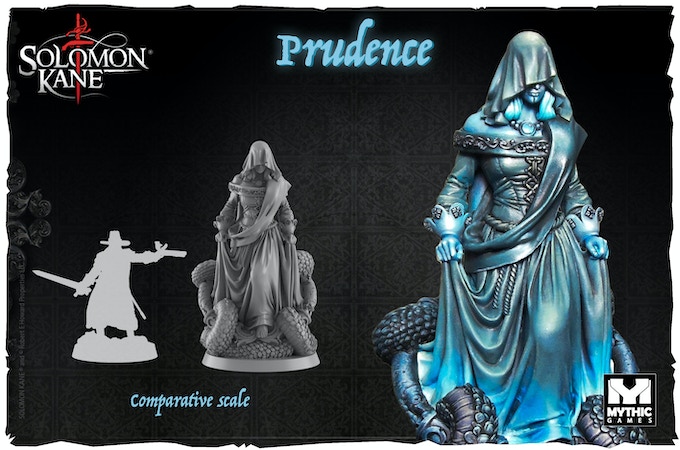 Justice is willing to listen to both sides. She is fair and balanced, and is expert at finding a solution that benefits everyone. Her areas of skill are Talking and Influencing a situation for the better. 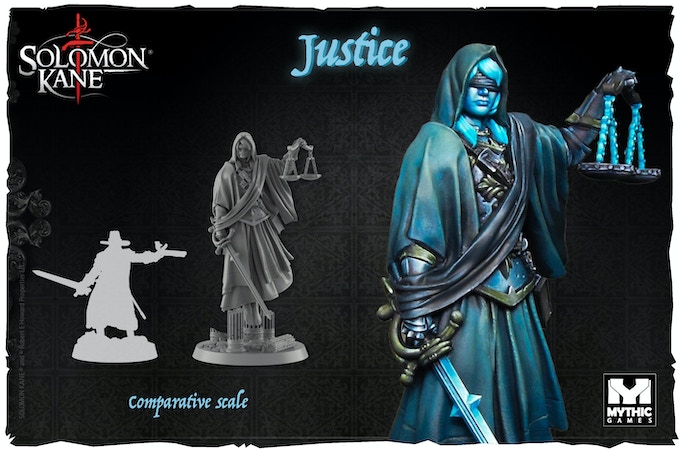 Temperance keeps a sharp eye and a clear head. She encourages Solomon to keep his wits about him, and be aware of what is going on around him. Her speciality is exploring the environment, and avoiding nasty surprises. 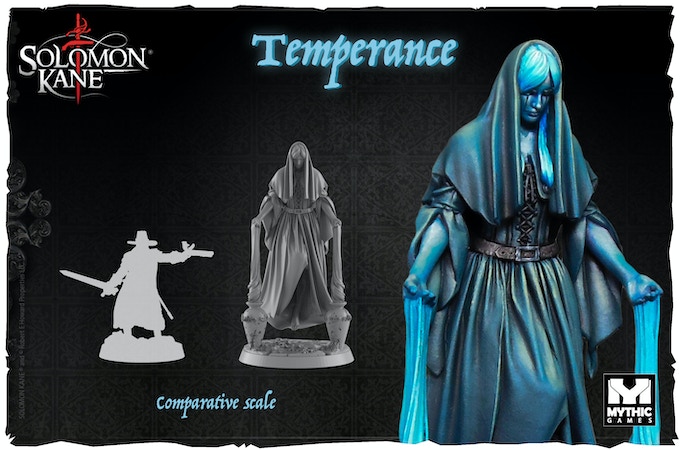 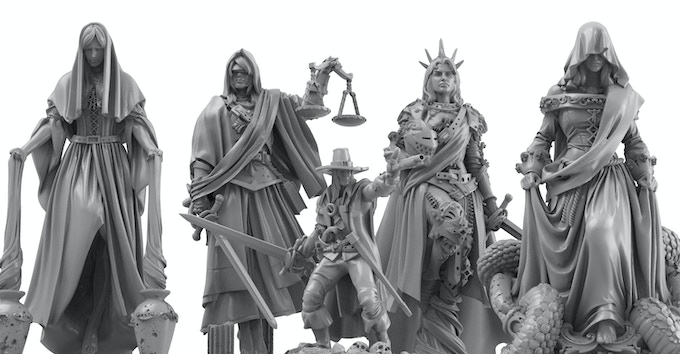 Solomon Kane is a loner, and only begrudgingly accepts the aid of others in his quest. However, when others need his aid he is quick to come to their assistance, and this means that his Adventures against the Darkness sometimes include companions. 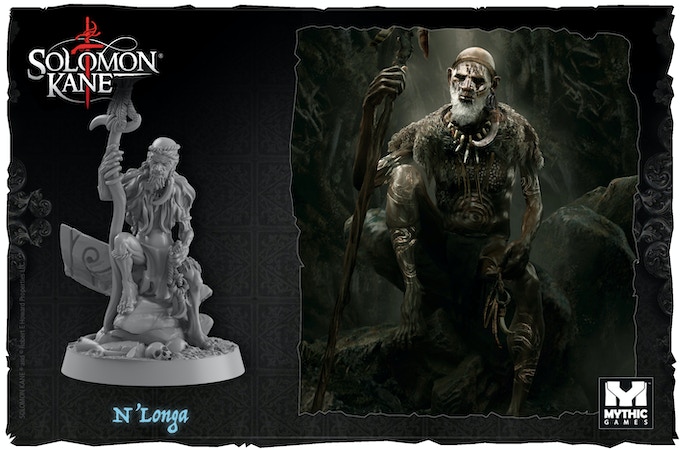 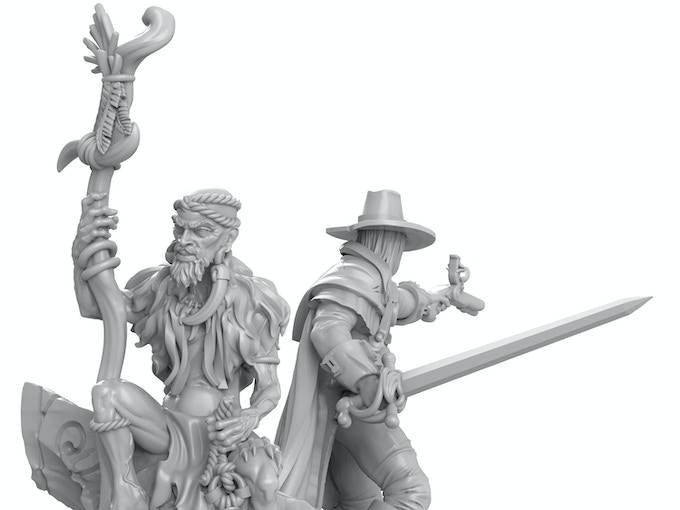 The forces of darkness

Darkness is the natural opponent of Light. It is a combination of all the secret, unsavoury feelings and deeds which men are capable of. It lurks in the blackness, moulding the essence of the night into its minions, and sending them to plague the mortal world. 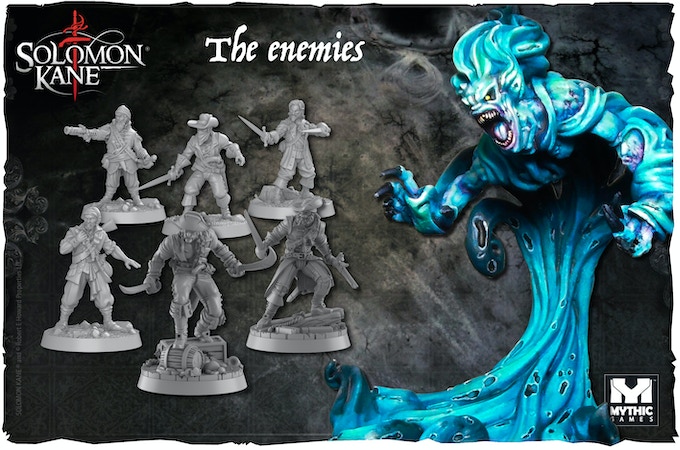 The main servants of Darkness are the mist-like Shadows. They are not really creatures at all, more embodiments of a terrifying idea. One that can drive mortals to insanity and death. 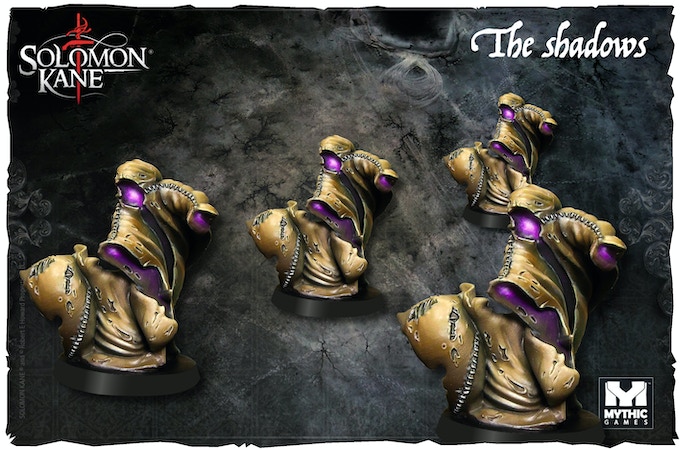 Through his many Adventures, Solomon Kane encounters a wide variety of misguided, malevolent, or just plain evil individuals who all do Darkness’ bidding – whether they realise it or not. These range from simple thugs, through cannibal tribesmen, to otherworldly and magical creatures. Solomon Kane must overcome them all. 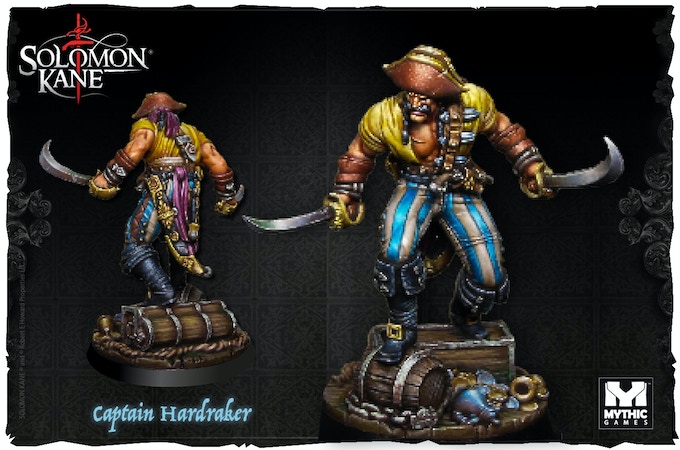 Solomon Kane’s lifelong fight against Darkness is told in a series of Adventures, based on the stories and characters created by Robert E. Howard. Adventures are broken down into 1-5 Acts, depending on their length. Each Act is itself broken down into 8-10 Chapters. A gaming session will typically be a single Act, or part of one. Depending on the time you have available, you may play through a whole Act, or be able to complete only a few of its Chapters. If this is the case, you simply use the game’s save function to remember where you have got to, and you can return to complete the rest of the Adventure another day. 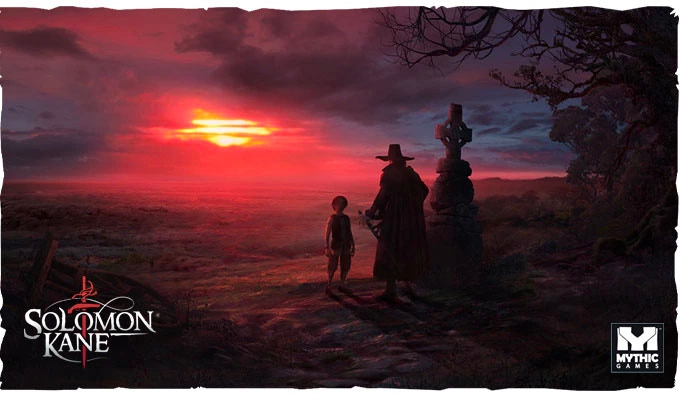 When you play through an Act, you naturally start with the first Chapter. One player reads the narrative text aloud and follows the instructions on the card. The players then do their best to help Solomon Kane overcome whatever challenges the Chapter throws his way, and then they move onto the next one.

Each Virtue Turn, the controlling player rolls their Fate dice to see what resources they have available to pay for actions. These dice can be donated to other players, or saved for later Turns, as well as buying actions immediately, and deciding how to coordinate these actions and share these resources between the players is a big part of the game. Solomon Kane takes the concept of cooperation very much to heart, and the players need to be discussing and working together throughout the game. Even when it is not your Turn you are involved in vital decisions.

After each player’s Virtue Turn comes a Darkness Turn. This is where the AI deck acts to thwart the players and destroy Solomon Kane. It can move its minions on the board, trigger unpleasant events, or simply sap the will of the mortals to carry on.

The Act continues with the players resolving one Chapter card after another, with their Adventure unfolding as they do. After many trials and obstacles, a final Chapter card will tell the players whether their actions have been enough to achieve victory, and whether they have won or lost. Solomon Kane is a pure co-op game, and players either all win together, or all lose together.

Solomon Kane uses a number of different card types to tell the stories. These are:

These tell the steps in the story. Each Chapter number has a number of different options represented by different cards, some easier to complete, some near-impossible. This is a little bit like going through a choose-your-own adventure book, but instead of simply picking what you want to do, the players have to achieve a particular effect with their actions to decide what happens next.

The Darkness deck is what drives the player’s opponent. Each card is divided into several sections, each applying in a different circumstance. This allows the AI to be flexible and to react differently to each situation. Using them is simple: just flip the top card of the deck at the start of each Darkness Turn and do what it says.

When a Shadow triggers an Event, the next card in this deck is revealed. This is usually bad, though not always. Occasionally the Light shines through the Darkness and a brief reprieve is granted to Solomon Kane and his companions.

Each Virtue has their own unique 10-card deck of Virtue cards. These cards list the possible actions for that Virtue, together with the cost in Fate dice to perform each one. In principle, any Virtue can do any action, though only some of the actions will be available at any one time. During the game, players must carefully manage their decks, ensuring that their active cards give them the most useful range of options for the task at hand, and work well alongside those of their companions.

There are many secrets in Solomon Kane, and whilst the Adventures are based on Robert E. Howard’s tales, they have been greatly expanded. Where Solomon chose one path in the original works he now has a choice. That is, the players collectively have a choice to decide, by their actions, which path to take. Discovery cards hide many of the possible outcomes from the players, and keep the elements of tension and surprise: you must decide before you know for sure what will happen next. This means that even if you have played the Adventure before, there will be fresh elements each time. 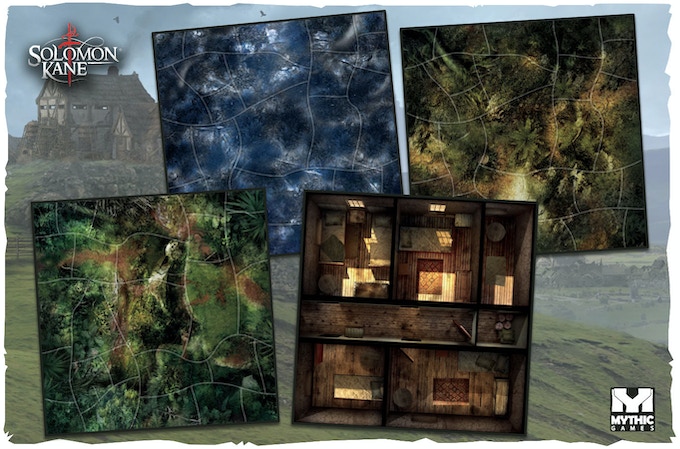 Each Scene Chapter has a map, made up of 1 or more of the many double-sided tiles from the box. Maps vary in size and shape, each offering a unique puzzle for the players to unpick.

Each Turn, a player rolls 3 Fate Dice to see what energies are available. The fate dice show Bravery, Determination, Fear, Pain, and (of course) Faith.

Each of the Virtue cards has a number of slots for these resources, and the action on that card can be bought by filling those slots with matching results on the Fate dice. The ability to save some rolled dice for future Turns, and donate much-needed resources to other players makes for a lively discussion. What is the best thing to do? 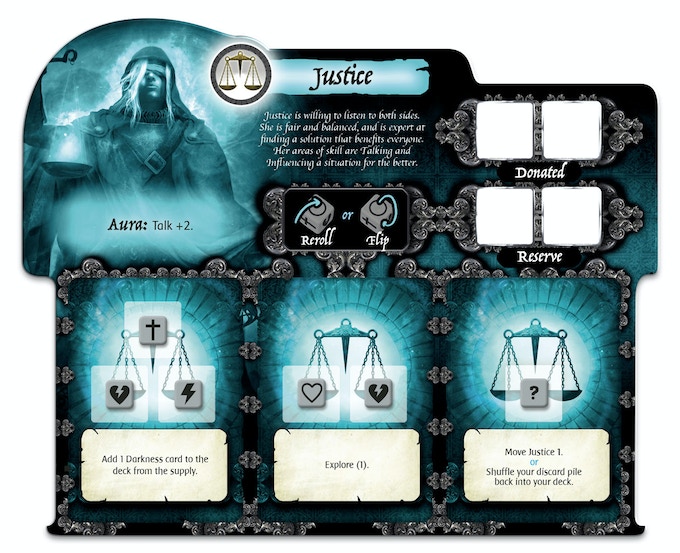 Each player has a dashboard for the Virtue they are playing. These are all different. They include unique actions, effects of the Virtue’s aura, and spaces for reserved and donated dice.

There are four game values that are tracked throughout the game. Three of these are measures of Solomon Kane’s abilities: Strength, Clarity, and Compassion. Each of these is linked to a specific type of test: Strength to Fighting, Clarity to Exploring, and Compassion to Talking. As the game progresses, these tracks may rise and fall. In addition, there is a fourth track: Danger. This monitors the overall Danger of the situation. The more it rises, the more perilous the situation gets. 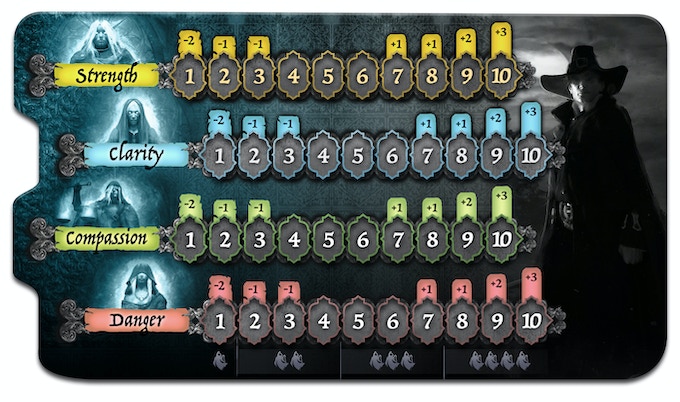 Each of the Virtues is linked to one of these tracks. Their actions will often draw upon it, and in the process can lower or increase its value. However, these tracks apply to every Virtue. Even if it is Courage who is most tied to the Strength track, all Fight tests triggered by any Virtue will apply its modifier to them. So, whilst each Virtue looks after its own track, their management of it will impact every player, requiring them to work together.

Solomon Kane includes a huge selection of beautiful 35mm scale miniatures, ranging from the man himself, through dastardly foes and innocent bystanders, to the towering Virtues who aid him. Although nominally 35mm (the height of an average man), the miniatures are all different sizes depending on the individual they represent. This gives us a range from 27mm tall children to the 90mm tall Virtues. Each miniature is a carefully-sculpted masterpiece, full of character. To further enhance this, and to give the painters among our backers even more to enjoy, each sculpt also has its own unique scenic base. 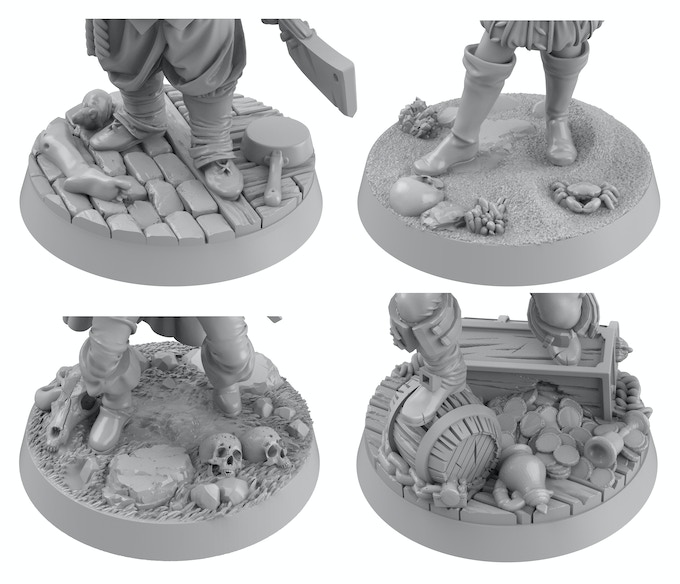 We use technology such as cookies on our site to personalise content, provide social media features, and analyse our traffic. More Info
Hide this message